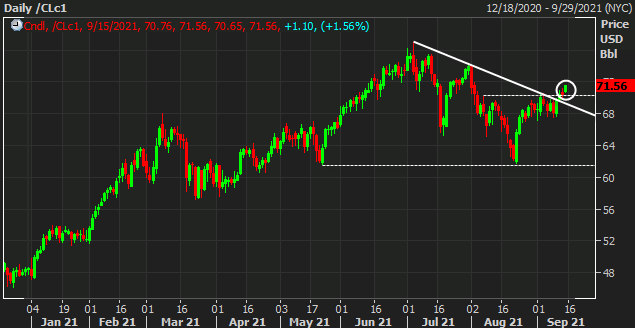 Buyers are following through on the early week momentum today as oil looks to solidify a technical breakout this week, after contesting key levels on Monday here.
The push towards $71.55 now looks to be a clean running one that could extend back towards the 30 July high near $74 as buyers keep in control for now.
China releasing more oil from its strategic reserves will continue to be a wildcard to watch but otherwise, the prospects for oil to push higher remain relatively firm.
Demand conditions in Asia are expected to pick back up in Q4 and the market is slowly feeding into the hype of an expensive winter for energy in general, which should be supportive of fossil fuels sentiment and I'd argue that includes oil prices.
Even if you cast aside the latter, there are still strong calls for a more bullish market with BofA even making their case that we could see a rise to $100.
I'm still an oil bull but I'd say baby steps for now though the charts are starting to turn in favour of a swing higher in oil over the next few sessions at least.