The GDPNow model estimate for real GDP growth (seasonally adjusted annual rate) in the fourth quarter of 2020 is 11.1 percent on December 1, up from 11.0 percent on November 25. After this morning's Manufacturing ISM Report On Business from the Institute for Supply Management and the construction spending report from the U.S. Census Bureau, an increase in the nowcast of fourth-quarter real government spending growth from 4.4 percent to 4.9 percent was slightly offset by decreases in the nowcasts of fourth-quarter real personal consumption expenditures growth and fourth-quarter real gross private domestic investment growth from 6.2 percent and 46.7 percent, respectively, to 6.1 percent and 46.6 percent, respectively.

The next GDPNow update is Friday, December 4. Please see the "Release Dates" tab below for a list of upcoming releases. 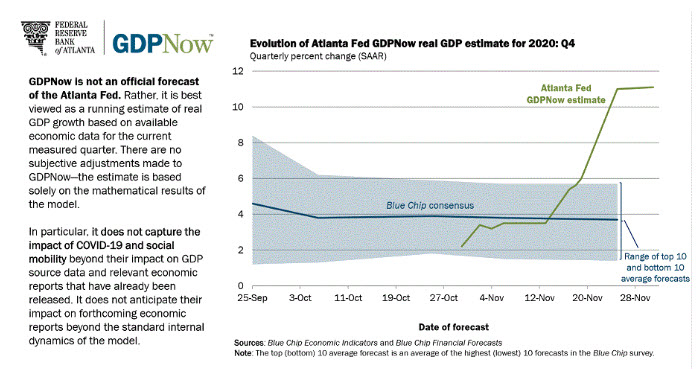 GDPNow is not an official forecast of the Atlanta Fed. Rather, it is best viewed as a running estimate of real GDP growth based on available economic data for the current measured quarter.
There are no subjective adjustments made to GDPNow-the estimate is based solely on the mathematical results of the model. In particular, it does not capture the impact of COVID-19 and social mobility beyond their impact on GDP source data and relevant economic reports that have already been released. It does not anticipate their impact on forthcoming economic reports beyond the standard internal dynamics of the model.