ForexLive discovered and reported on the early release of the Bank of Canada business outlook survey and now the central banks has confirmed that data from the report was available 9 minutes early.
"Today, data from the Bank of Canada's Winter Business Outlook Survey was made visible on our website approximately nine minutes prior to the official release time. This was due to an error in the data publication process," the BOC said in a statement.
We discovered that the charts on the Q3 survey were updated to include Q4 before the numbers were slated to be published. 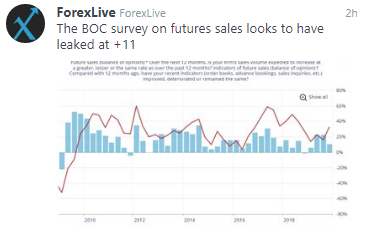 "The Bank regrets this error and is initiating a review of its publication process for the Business Outlook Survey to ensure the data and report are published only at the designated time," the BOC said.
We will be watching the next release closely.