Apple earnings after the close. What to expect?

The stock price has risen dramatically since plunging in December 2018.  Since the bottom which was near the start of 2019, the price has moved up 127.7%.  That is a big move.  However, recall the price was hit extraordinarily hard from the October hi to the January low. The price decline fell by nearly 40% (39.18% from the high to the low).  As a result some of the large percentage gain is as a result of the oversized percentage loss leading to the January 2019 bottom.  If you measure the move from the October 2018 high, the gain is 38.49%.
Nevertheless, the rise in price has also led to a pretty dramatic rise in the trailing price-to-earnings (that does not really lie). According to FactSet, that measure is currently at 27 times versus 16 times over the past 5 years. That may be attributed to new growing service and product businesses (like AirPods and the Apple Watch). Apple is not a one trick pony now. It may also be attributed to the very reasonable 16 fwd P/E in the first place. Nevertheless, earnings will likely need to prove it's worth and valuation going forward.   There is a lot priced in (or so it seems).
The last 8 earnings has led to an average move of around 4.60%.  With the current price at $316.44, that would imply a move to about $301 to $302 on a move lower, and up to $330 on a move higher.
Technically, the price moved above a topside channel trend line in the move to the high in January, but fell back below over the last 2 days. A move back above the topside trend line would be more bullish.  A move above the high price last week at $323.33 would open the door for more upside.... 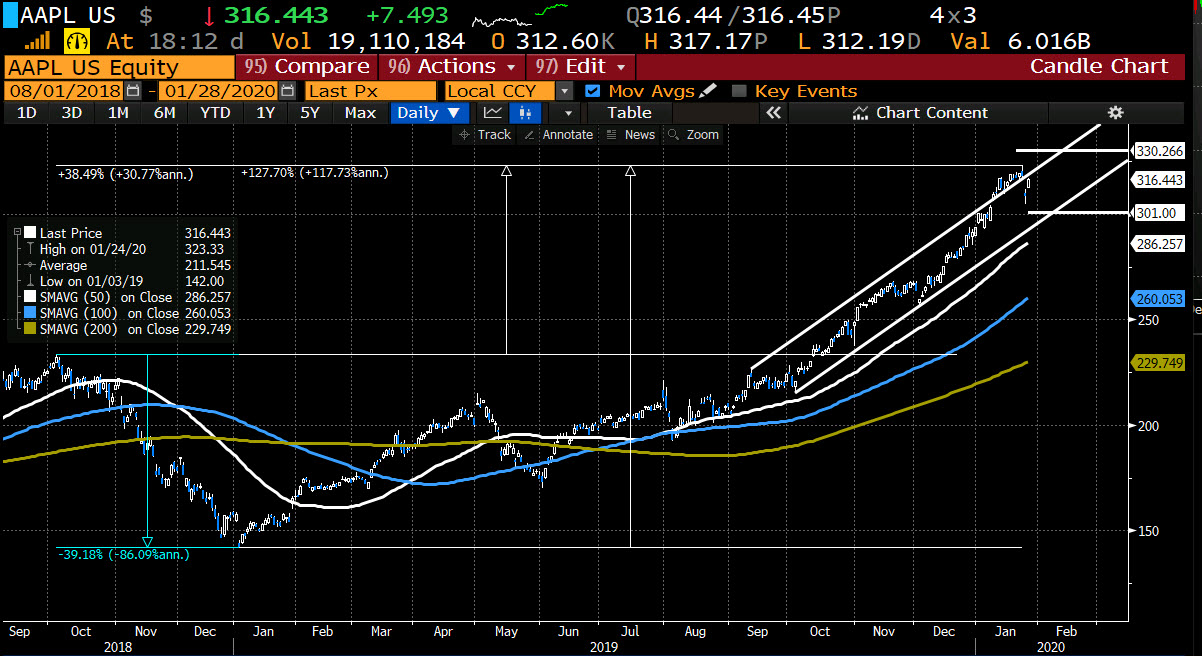 ....and then there is the question of forward guidance.  Does Apple sandbag future growth or do if warranted, do they blow their own horn (similar to what Intel did last week?).
With companies like Apple, there are a lot of things that can go wrong given the various businesses (recall the up and downs from Netflix release).  The good news for longs is if you even just in from the beginning of December 2019, when the price was around $260, there is a lot of profit to risk (BTW the 100 hour MA is at $260 now).  If it is a disaster relative to expectations, and the price goes below $300, the rising 50 day MA is at $286.25. That should be a good enough flush out (all things equal) and give sellers cause for pause.
ForexLive