What's coming up on the calendar front today

Good day, everyone! I hope you're all doing well as we hit the mid-way point for the week. Trading remains subdued today in the Asian session, but the Japanese yen managed to eek out further gains. We also had China December inflation and producer price data released earlier here. There are some concerns on the PPI reading, as it fell to the lowest level since November 2016.
Anyway, here is what's coming up on the calendar in European trading today:
0745 GMT - France November industrial production m/m & y/y data
0745 GMT - France November manufacturing production m/m & y/y data
Nothing too major here. Just a rough sentiment on one of the Eurozone's major economies. The German reading yesterday here was more important as the boom in the German economy is one where everyone is keeping their eyes on to see if it continues - and in turn if the Eurozone sentiment continues to improve. Prior reading for the French data later on can be found here. Expectations are for a slowdown in the industrial production y/y to 2.6% and manufacturing production y/y to 2.9%.
0930 GMT - UK November manufacturing production m/m & y/y data
0930 GMT - UK November industrial production m/m & y/y data
0930 GMT - UK November construction output m/m & y/y data
0930 GMT - UK November trade balance
Some UK data, but nothing that's too major. Manufacturing data will be the one to watch, though at times the reaction to the data release can be muted. But similar to EU data yesterday, when the market is quiet enough there could be some moves generated from the bias of the data. Prior reading can be found here.
1200 GMT - US MBA mortgage applications w.e. 5 January
Weekly US housing data, measures the change in number of applications for mortgages backed by the MBA during the week. Not the biggest of data points, but a general indicator of the housing sector sentiment.
That's about it for the day in European trading, it's a light one on the calendar so hopefully there'll be some action in markets to keep things going.
Hope you all have a nice day ahead, and as always good luck with your trading! 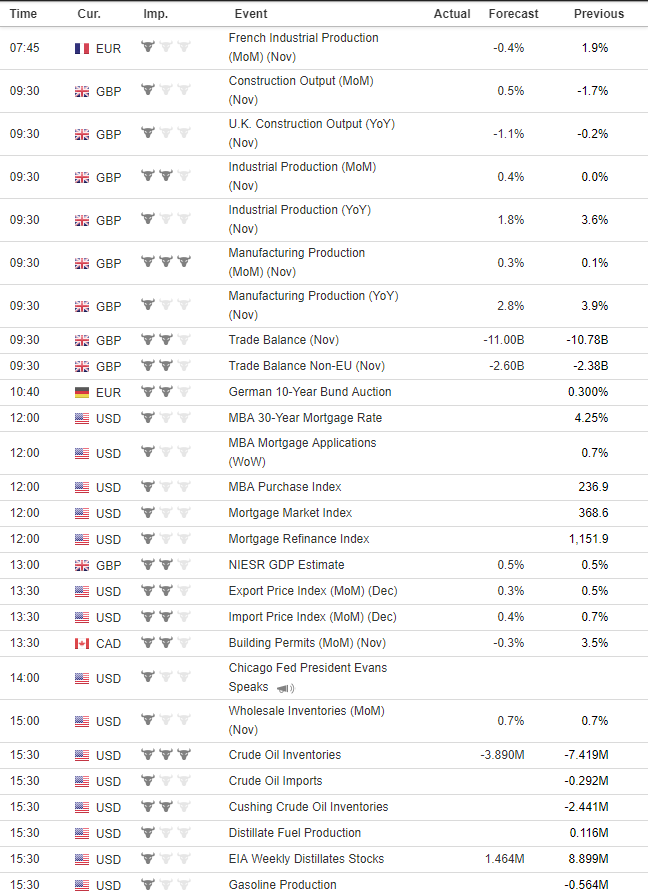