The oil squeeze is on. It's tough to predict when a squeeze will end but the chart can offer some helpful hints. 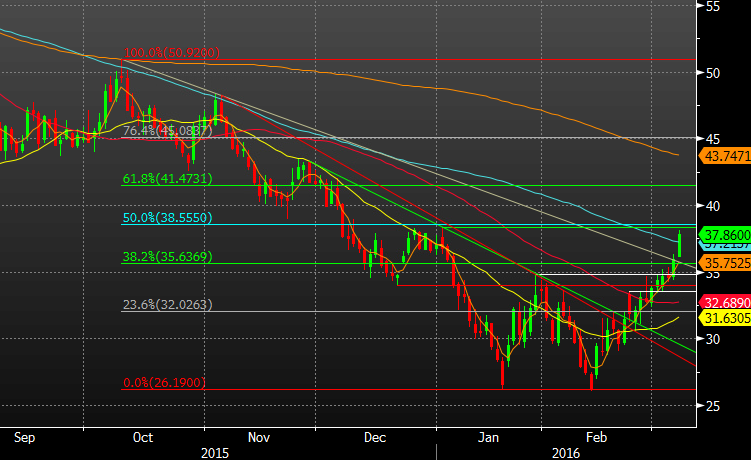 How oil performs at those levels will be an important watershed. If you want to use technical analysis to make a bull case, you would point to the double bottom at $29.19. The measured target of that formation is $43.81, which corresponds to the current 200-day moving average and the late-November high of $43.46.

Fundamentally, the equation is equally tricky. Concerns about supply are unchanged. One spot to watch is the production component of the weekly EIA inventory data. It doesn't get much attention but it helped set off the reversal last week where it showed a 2.6% y/y decline in US production.

Seasonals are a factor as well. Near the end of February, I wrote that March is the strongest month for oil on the calendar and said "a beautiful counter-trend squeeze in oil is underway."

I've been warning about oil gains since mid-February and consistently looking for $38. We've made it now, so what's next.

A few weeks ago, I said it would be a spot for fresh shorts:

"A break higher might slice right through the late January highs and take a look at the $38 level. If so, I think that would be the spot to sell it, in size."

Seeing how we've gotten there, I'm not in a rush to short crude. The time to do it may be around the FOMC. I see a growing risk of a hawkish Fed and that's something that will reignite USD strength and worries about global growth. At the same time, the supply story is virtually unchanged, if not more at risk of oversupply because of the recent bounce.

If oil shows it will hold these levels (and the latest tick is encouraging) it will be time to nibble on shorts but I fear that a renewed squeeze on shorts could come tomorrow as margin calls are made. The ideal signal would be something like another 5% rally tomorrow followed by a reversal and close lower but we'll have to wait and see what comes.